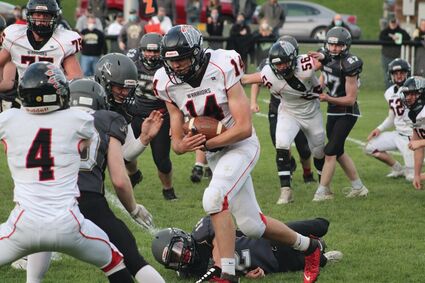 Black Hawk/Warren coach Desie Breadon has all the faith in the world in his team's defense and his team rewarded that faith with several big plays in the second half against Benton/Scales Mound/Shullsburg, including a stop on fourth-and-goal from the one-yard line that sealed the win for the Warriors.

The Warriors were up 26-22 when the Knights twice threatened. The first of these drives saw BSMS move the ball down the field with three big pass plays. Quarterback Jacob Duerr hit Dominick Cummins on a bubble screen to move the ball to midfield. Duerr then completed a screen pass to...