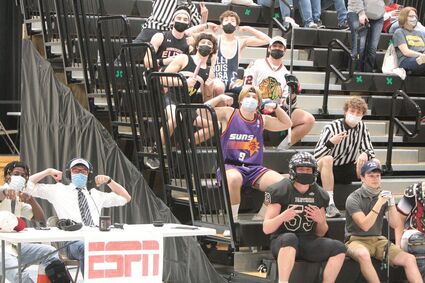 A full crowd is not yet allowed, but the Lena-Winslow "student section" provided plenty of light hearted entertainment during the Eastland vs Lena-Winslow volleyball match Monday night.

The Eastland Cougars came in with a player of the year candidate, a second place ranking in the region, and a team that had only lost one match to a 1A opponent all year. Meanwhile, the Lena-Winslow Panthers were in the midst of a rebuilding year with three freshmen starters on the varsity, and a fourth who sees a lot of action. So, the expectations were on improvement – not necessarily upsetting the high flying Cougars.

And following the 25-15, 25-16 sweep by Eastland, both teams could make a legitimate argument that they had accomplished something.

With a loud and fun-loving group of...