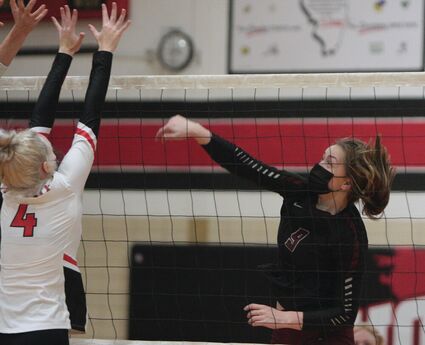 Pearl City had no answer for Dakota's Abi Schlueter who amassed 17 kills in their match Tuesday night.

Tuesday afternoon, Tabytha Toelke of Dakota was told that she would have to leave school and quarantine because a student near her in a class had tested positive for Covid. So her volleyball team had basically no time to try and organize a plan on how to fill the hole she left behind.

That absence showed itself in their first game against Pearl City on the road as the Indians made 15 unforced errors, and had two service errors, in falling 25-19 in game one.

"We were definitely trying to figure out our new roles with Tabytha out," said head coach Kim Toelke. "But I told them, they (Pearl C...