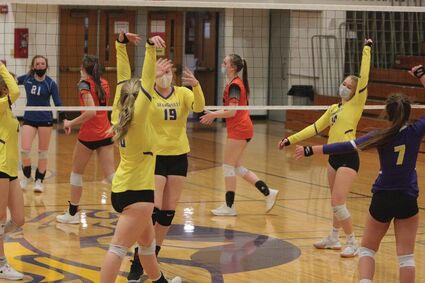 The Orangeville Broncos celebrate a key play during their sweep over Warren.

The undefeated Warren Warriors paid a visit to the winless Orangeville Broncos Monday night, but once the match began you would have sworn that the roles had been reversed.

Orangeville came out swinging, and early in game one McKayla Riemer was on fire – hammering shots down from the right corner squarely into the back left corner of the Warren defense. And as Riemer opened the door, the rest of the Broncos kicked it in.

Five different Broncos recorded kills in game one – four of them made more than one. Tori Plowman, Samantha Mock in the middle, and Kylie Wirth all joined Riemer on t...