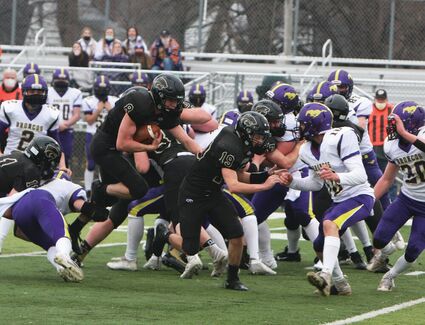 Ethan Fye charges ahead for more yards against the Broncos.

The Lena-Winslow Panthers were coming off of their first loss in more than a year – yes it was to a 3A power, but it was still a loss – and they were having to play without their top running back and top lineman.

"I honestly think Gennings Dunker is the best High School offensive lineman in the state, regardless of what class you look at," said head coach Ric Arand. "You don't replace kids like him an Marey, you need to change schemes and adjust."

Meanwhile, the Orangeville Broncos were fighting for respectability. After all, this was a team that had been bludgeoned by more than 40 po...