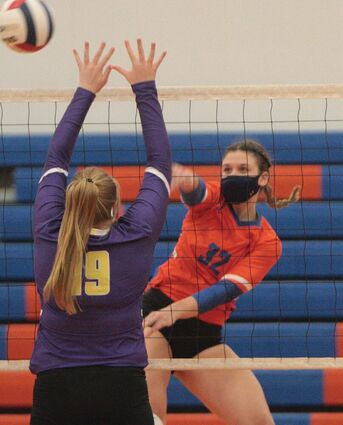 Eastland's Karlie Krogman led all players with ten kills on the night.

The Eastland Cougars played host to the Orangeville Broncos Wednesday night in a non-conference battle. On paper, Eastland was expected to win, but somebody forgot to tell Orangeville that as they were out-playing Eastland early in the match.

"It was jitters," said Cougar head coach Kelsey Pierce. "First game jitters and nerves. Normally we'd have 14 practices in before our first match, but this year we've had five."

The one thing Orangeville wasn't able to handle in game one, was Karlie Krogman in the middle. The Cougar middle hitter dominated play when she was in the front row – recor...