Bulldogs Roar Out Of The Gate 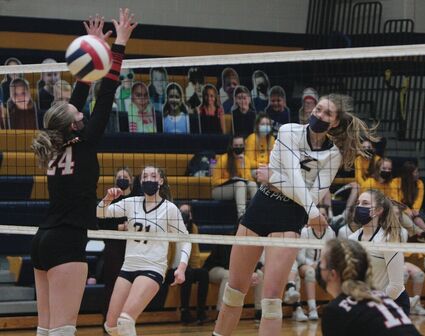 Maddie hildebrand drills a kill during game one action against Forreston.

Three Bulldog Volleyball starters – Addie DeMichele, Maddie Hildebrand and Ashley Lamm – had only put down the basketballs on Saturday, and the first time they were swinging a volleyball was in their opening match Tuesday night against Forreston.

"We didn't even have a full practice because Monday was a snow day," said Ashley Lamm. "So we really just talked each other through it."

Nobody would have been able to tell as Aquin roared out of the gate, forcing Forreston into several unforced errors. And when Ava Hiveley drilled an ace serve to make the margin 13-6, the Cardinals called ti...