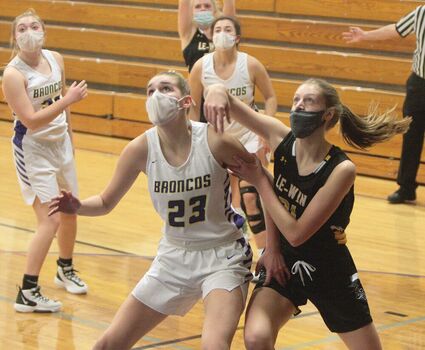 Fans will enjoy the battle in the paint between Orangeville's Whitney Sullivan, and Lena-Winslow's Grace Groezinger for the next four years.

Coming into their conference battle Friday night, both the Orangeville Broncos and Lena-Winslow Panthers were coming off of a pair of tough losses. The Panthers had dropped two tough games to Dakota, while Orangeville had been run over by a determined Aquin squad. So the worry was that if either team fell behind, they might begin to pack it in and look forward to Volleyball.

Both teams had ample reason to call it a night, but neither one did.

Early on the Panthers were hot – especially Sadie Mowery, who dropped in three long range three point baskets as the Panthers exploded for the ear...