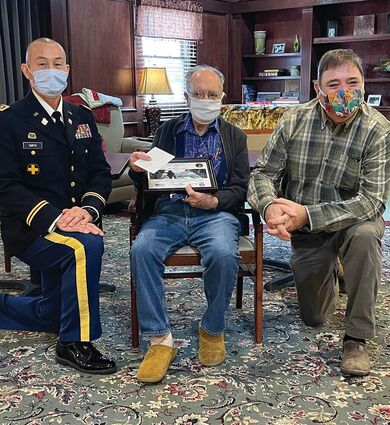 William "Bill" Hills, a former Lena resident for 30 years and WWII veteran, was honored on his 97th birthday at Oakley Courts for his military service.

Readers may not be familiar with William H. Hills, but they should be. And last week efforts were made to honor the longtime Lena resident and World War II veteran who is currently residing at Oakley Courts in Freeport on his 97th birthday.

Bill joined the Army back in 1942, and was originally a member of the Veterinary Corps working with dogs and mules, but was then transitioned to being a driver for the Colonel leading the setup of advanced Headquarter posts as the front advanced through the Po Valley in Italy.

Some highlights and memories of his days overseas include: