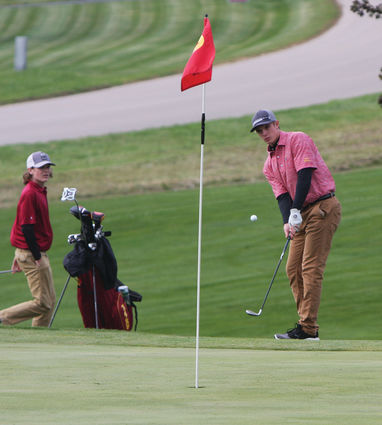 Stockton's Austin Chumbler chips onto the #18 green during the conference tournament.

The biggest drama regarding the NUIC Boys Conference Tournament was whether or not the Dakota Indians would be allowed to participate. After having their school shut down due to Covid issues, the initial ruling was that they would not be able to play – even though they were the undefeated regular season conference champion coming in.

But the Dakota School Board allowed the team to compete after a thorough round of testing and protocols were followed, and the Indians responded by having five golfers all finish in the top 12 individually at the Tournament held at Lake Carroll last week.