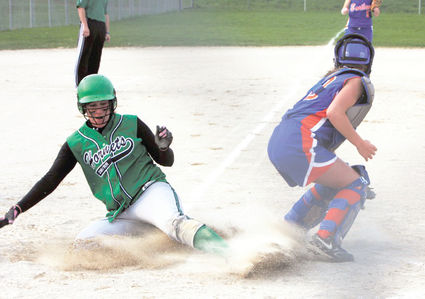 Whitney Kieffer opened the scoring for the Hornets when she made it home late in the game.

Yes, it was a major showdown between two conference contenders, but how many times do both games of a double header turn out to be exciting?

Eastland paid a visit to Scales Mound last week, and in two games marked by defensive gems, good pitching and solid play in the field, the Cougars took a huge step towards capturing the conference title with a 3-2, 1-0 sweep over the Hornets.

Game one initially looked like the Cougars would run away with it as Marissa Harris was dominant on the mound early in the game. Of the first nine batters who faced Harris, she struck out eight of them!