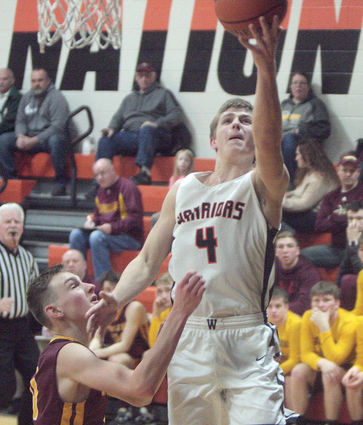 Ethan Williams goes up for the easy basket during first half action against Stockton.

With just over two minutes gone in the first quarter, the Warren Warriors were suddenly faced with a problem – sophomore post, Braydn Bohnsack – had just picked up his second foul and had to head to the bench. That left Matthew Riedl, all 6'1" of him, as the only inside "force" for the Warriors against a Stockton Blackhawk squad with plenty of size.

To make matters worse, Warren had already been whistled for six fouls, compared to only one against Stockton – which made sense because the Blackhawks were sitting in a zone defense, while Warren was playing a physical man-to-man.