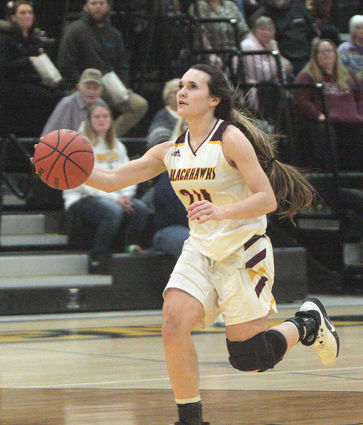 Lizzie Eisfeller and the Blackhawks ran away from South Beloit with an explosive 44 points in the first half.

Both Stockton and Lena-Winslow advanced to the Regional semifinals Tuesday night by 20 point margins, but the manner in which they did it was far from similar.

Stockton gave up the first basket to South Beloit and looked almost like they didn't want to be there for the first few minutes of the game as they repeatedly threw the ball away. But after a pair of three pointers by Katie Wright and Tiana Timpe, the defense picked up – resulting in a slew of fast break opportunities – and from there it was like watching a layup drill.

Even Katie Wright – who has bad shins and is not known f...