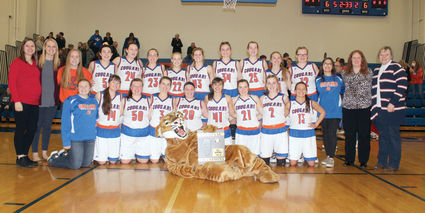 For the fourth year in a row, the Lady Cougars captured the Regional crown.

It took just 92 seconds for the Eastland Cougars to jump out to an 11-0 lead against Polo in the Regional championship game. It would be a precursor of things to come as the Cougars delivered a massacre on St. Valentine's Day for their fourth straight Regional title.

Seconds into the game, Meredith Janssen put the first points on the scoreboard, making a layup. Erin Henze followed with a three-pointer. Then a trey by Lydia Coatney. Then another three-pointer by Henze. Polo coach Jeff Grobe used his first timeout to try to stop the Eastland momentum.