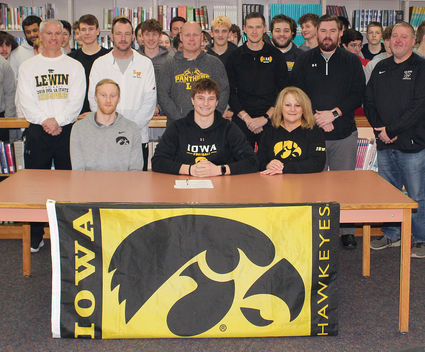 Surrounded by family, coaches and teammates at Lena-Winslow, Sean Ormiston (center) makes the formal commitment to accept Preferred Walk-On status to be an Iowa Hawkeye next year.

Ormiston, who plans to major in nuclear medical technology, signed an agreement to join the Hawkeyes as a preferred walk-on in front of family, coaches and teammates in the Lena-Winslow High School Library on Wednesday, February 5. He says Iowa is looking at him as a linebacker first, but he will also get the chance to play at fullback.

The Hawkeyes first contacted him on his bi...