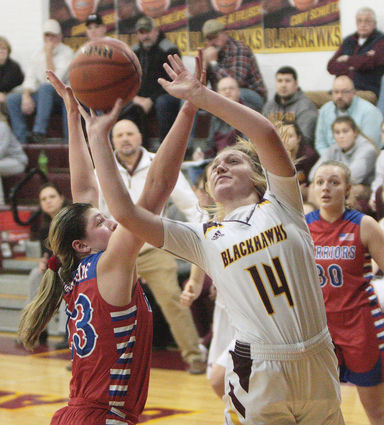 Kenzie Haas fights to put up the shot against East Dubuque during Stockton's second half rally.

The Stockton Blackhawks came into their conference battle against a tough East Dubuque squad with a major problem ... two starters were out, along with one of the first players off the bench. With a limited squad, another curve exposed the problem when East Dubuque came out in a box and one defense on Tiana Timpe.

"We have a box and one offense, but normally that's with Lizzie (Eisfeller) and Katie (Wright)," said coach Tim Timpe. "But my sophomores hadn't run it much at all, and I wasn't about to try and teach it on the fly in the middle of the game."

Emma Westaby held her own early on w...