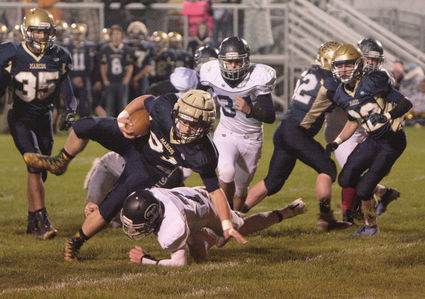 The Polo Marcos methodically pushed the River Ridge Wildcats around all night to lock in the number two seed in the upcoming 8 man playoffs.

There was a lot of excitement as the third ranked River Ridge Wildcats and their speed paid a visit to the second ranked Polo Marcos and their power option Friday night. And while both teams will be top seeds in the upcoming playoffs, the Marcos delivered a powerful lesson ... River Ridge has some work to do.

The Marcos stepped back to throw the ball three times – but only once did they actually let it fly – for a two point conversion to a wide open tackle eligible. The other two times quarterback Tucker Mumford rolled out, let the defenders spread out, then scrambled ahead for more ya...