Preview Was A Pounding 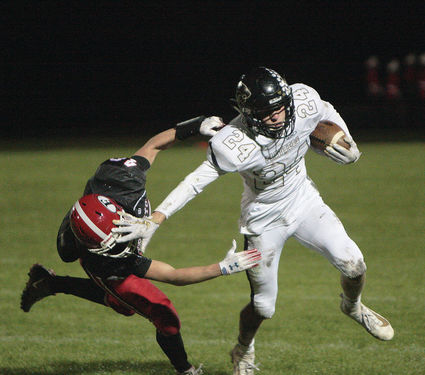 Kade Chrisman fights off the defender before racing down the sideline for a 41 yard gain to set up another Panther touchdown.

While there were some people who follow the NUIC Football closely who thought Lena-Winslow would not have too much trouble knocking off the undefeated Forreston Cardinals ... nobody saw this coming.

In what can only be described as an old fashioned beat-down, Lena-Winslow ran through, over, around and on top of Forreston on their way to a 46-14 running clock victory.

But things didn't start out too explosively for the Panthers as they took the opening possession and got to mid-field thanks to a pass interference call. But Forreston was keying on Sean Ormiston, and Lena-Winslow faced a fou...