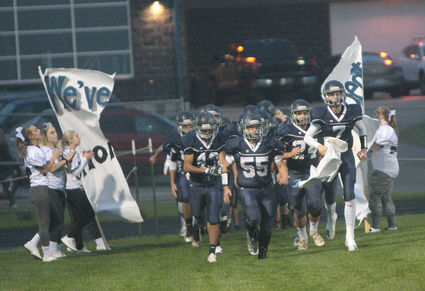 The River Ridge Wildcats run out onto the field for their Homecoming battle with the Flanagan Co-op.

It was Homecoming week for the River Ridge Wildcats last Friday. And while most people outside of Elizabeth and Hanover may not know it, the Wildcats have plenty to celebrate as their 8-man football team remains undefeated in competition in Illinois with an overall record of 4-1 – dropping their one game against a school from Iowa.

"Yeah that was an eye opener when we played them, but Iowa has been playing eight man for several years," said head coach Doug Nicholas. "So it was probably the best thing that could have happened to us – learning how much we didn't know."