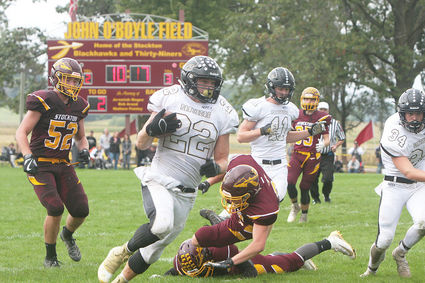 Stockton's defensive scheme stuffed the middle of the Panther line, but the Lena-Winslow began going wide ... it paid off.

When was the last time a team lost a game 30-0 and still felt like they accomplished something?

Make no mistake, what Stockton pulled off against the Lena-Winslow Panthers was nothing short of impressive. The Panthers had not been forced to play a full game all season, in fact every contest ended with a running clock and the reserves getting plenty of playing time.

The same was expected in the Panther's match up against Stockton.

But the expectations were wrong.

Give Jesse Snyder and his staff a ton of credit, the game plan on defense was effective.

"If we can keep them running sidewa...