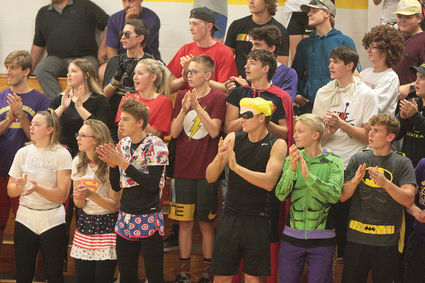 The Bronco student section - hands down - was the best cheering section we've seen this year.

The Orangeville Broncos only made five kills, and had eight service errors in game two against the River Ridge Wildcats, but – somehow – they still won 25-17 to sweep the non-conference battle at home.

"I'm not sure how we pulled that second one out," admitted head coach Abbi Rille. "It certainly wasn't our best effort."

But according to some of the players, it is quite possible that the enthusiastic support of the Bronco student section may have played a part in the victory.

"When they started clapping and stomping their feet, you just got a feeling like, 'Here we go'," said McKayla...