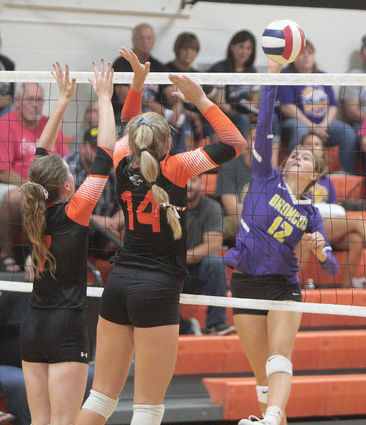 Sophomore Kylie Wirth was brought up to varsity when Emily George went down, and tallied five kills against Warren.

On Monday night in Warren, the Orangeville Broncos swept past the Warriors by a pair of 25-13, 25-13 scores.

As far as the game was concerned the story was an obvious one. The Broncos attacked Warren with a barrage of hitters coming from every imaginable angle. Although the Broncos lost Emily George when she came down on a ball during warm-up at Dakota, they found a suitable replacement in sophomore Kylie Wirth who drilled four kills in game one – five overall on the night.

But there was still a large assortment of reliable hitters who weren't injured. Cali Diddens led all players with...