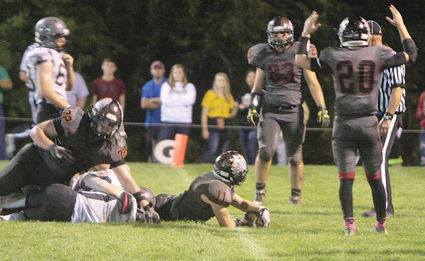 Cayde Milz was ruled down just shy of the goal line in the third quarter of the Warrior's 33-6 win over the B/SM/S Knights.

It was a historic homecoming for the Warren Warriors last Friday night. To begin with, their contest against the Benton/Scales Mound/Shullsburg Knights incorporated fans from no less than ten different small towns between the two combined co-ops. It also marked the first time that a Six Rives conference game was ever played in Illinois. But most important of all, it pitted the undefeated and top ranked 7A Blackhawk/Warren Warriors against the undefeated and sixth in the state 6A Knights in a battle to decide the conference title.

Mother Nature was in full cooperation, and although the fiel...