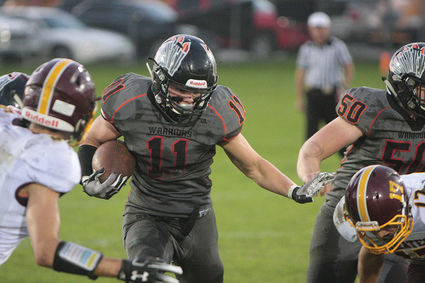 Waterloo was a bigger school, but the Blackhawk/Warren Warriors pounded the Pirates all night with their massive veer ground assault.

With most of the local teams either being covered, or not having a quality match up, this past Friday I was going to stop off in Warren to see the new Blackhawk/Warren Warrior co-op take on Waterloo.

Weather and field conditions moved the game up to South Wayne, but having gone to East Dubuque to cover games, what difference did the direction make – but I won't lie – I was hoping to see good football, but I wasn't expecting it.

The last time we covered a Six Rivers team was several years ago when Aquin played against them in what turned out to be a major blasting by the Bulldogs. So e...