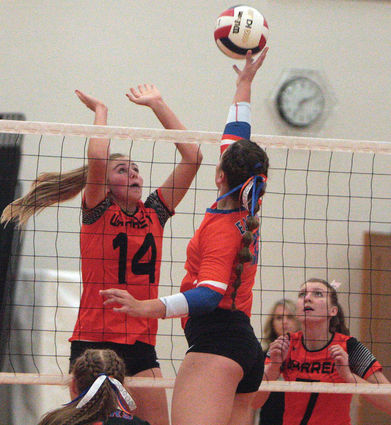 Sidney Sigafus and the Warriors played a strong net with four stuff blocks on the night.

Very rarely does an athletic event take place where both teams walked out of the gym feeling good about themselves, but that's exactly what happened Monday night when the Warren Lady Warriors paid a visit to Lanark to challenge Eastland.

As game one opened up, Cougar middle hitter, Karlie Krogman, was set up for a big kill in the middle – everybody saw it coming – but so did Warren middle hitter Sydni Sigafus who timed her two handed slap perfectly and opened the match with a strong stuff block to put Warren up 1-0.

The Warriors played strong early – matching Eastland at the net as...