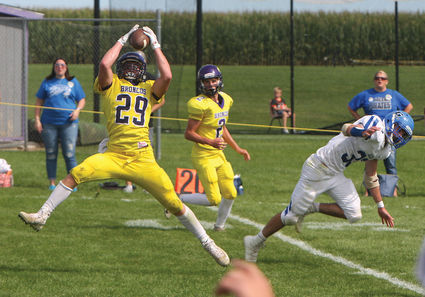 When Garrett Rodebaugh made this leaping interception at the Bronco 21, it stopped the last best chance of the Pirates to score in the game.

With just over three minutes remaining in the game, the Orangeville Broncos still held on to their precarious 6-0 lead over the Galena Pirates, but faced a fourth and three at the Pirate 15.

"People probably thought I was nuts," admitted head coach Jay Doyle. "But I knew they were keying on Carter and Garrett, and I didn't want to pass."

Instead, the Broncos came out of their time out setting up in field goal formation with junior Zach Baker lined up to kick.

"What the hell are they doing?" murmured the Bronco f...