Who Wants It More? 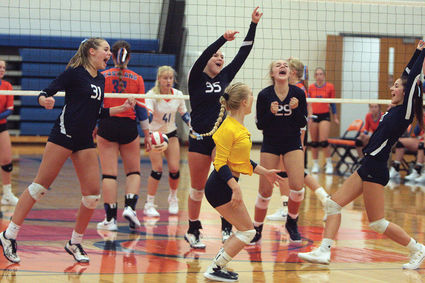 Aquin celebrates the final point of their match victory over Eastland.

What a difference a week makes.

In Aquin's opener against the Lena-Winslow Panthers, the Bulldogs struggled to stay in the game as they were blown off the floor in two games. But in their second contest of the year, Wednesday night at Eastland, it was the Bulldogs who completed the sweep over the traditional power in a 25-17, 26-24 slugfest.

After both teams rattled off some early points, Aquin claimed the lead as Abby Barr slammed down a kill in the middle, and sophomore Ava Hiveley followed up with another. When Barr added one more to make it a 16-12 lead, Eastland called time out to t...