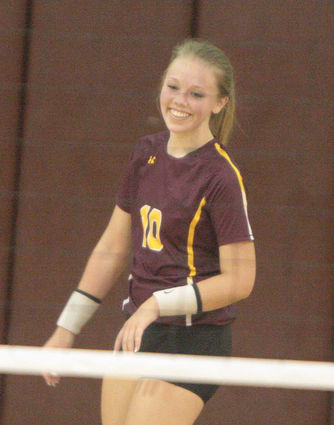 Stockton libero, Kaige Brown, was all smiles after drilling a hug kill in game two of the Blackhawk's sweep over Orangeville.

The Stockton Blackhawks opened their volleyball season up at home Monday night against a solid Orangeville Bronco squad in a battle that could have gone either way ... if not for the perfectly timed highlight reel efforts of Blackhawk senior Kaige Brown.

In game one, the Blackhawks jumped out to the early 8-4 lead after a kill by Katie Wright which prompted Orangeville to call time out.

But the Broncos fought right back – knotting the score up at 14-14 thanks in large part to a balanced offense that was being aggressive and dropping down kills. Four different Bronco hitters all had thre...